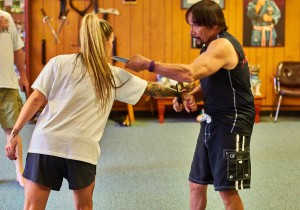 During the last few, maybe 20 or so, years, many of you have been to camps and seminars with me where we did lock flows, hubad drills, and such as that. These drills came to me via SIfu Larry Hartsell, a student of Bruce Lee and Dan Inosanto, among other prominent teachers. I picked these things up by attending camps and seminars with him and immediately saw the value of them in as in aid to understanding and enhancing our tuite and karate practice. Sifu Hartsell passed away a couple of years ago and left a legacy of quality instructors in his path, one of which is Mr. Ray Parra of Austin, Texas.

My path crossed minimally with Mr. Parra during one of the camps and when the Lone Star MMA Club in Tyler, Texas sponsored a seminar with him three or so years ago, I remember him but was unable to attend. I encouraged one of my students, Pat Wilson, to attend and he did. Some months later, Pat and I would sponsor a seminar with Guro Parra at my school in Athens, Texas and a new friendship was born. I have been training with Guro Parra since and was accepted into his Instructor’s Group and have trained with him as often as possible since, hosting two camps in Athens and numerous trips to Austin including his annual Instructor’s Camp last March in Kyle, Texas, with Nathan Batson. The purpose of this article is to introduce you all to this fascinating person, Guro Ray Parra.

Guro is a term from Kali which essentially means the same thing as Sifu does in Chinese Arts or Sensei does in Japanese arts.
Guro Parra is the current owner and chief instructor at the Parra Academy of Martial Arts in Austin, Texas and his Affiliate Instructor’s program across the United States. He is also the head instructor for Mr. Randy White (ex Dallas Cowboy of note) in his Randy White Big Man Camp football program. He holds a blue belt in BJJ thanks to past training with Robby Robadi, Devin Miller, and Darrin Lillian.

Guro Parra was affiliated from 1973 to 1986 with the Butokan Karate Association and attained a 5 th Degree Black Belt in Butokan Karate under Sensei Lynn Nichols. He as trained in Shotokan, Tae Kwon Do, and Hapkido under Lynn Nichols and Greg Allen, El Paso , Texas and trained and competed in Bushido Full Contact Fighting and participated in public demonstration matches. While in El Paso, he also ran martial arts classes for disadvantaged youth at various community and YMCA centers. From 1973 through 1975, he belonged to the World Tae Kwon Do Association and attained a 1 st Degree Black Belt Tae Kwon Do. Additionally, he trained at the University with the International Exchange Students Association from China in Wing Chung and Kempo Karate.

In addition to all of the certifications listed above, Guro Parra’s martial arts achievements are another long list including being inducted into the Martial Arts and Boxing Hall of Fame, El Paso , Texas , due to accomplishments in the Arts, commissioned by the US Military to provide advanced and intermediate- edged weapons training for the US Special Warfare Center to 7 th Special Forces Group (Airborne), Ft. Bragg , NC and the US 7th Cavalry in Ft Hood, Texas, to provide international training in edged weapons and hand to hand combat to the Philippine Recon Marines, Special Response Team and the National Police Academy in the Philippines through the Pekiti Tirsia Global Association, to provide on-going law enforcement trainers training in grappling with edged weapons for the Texas Department of Public Safety.

He has provided defensive tactics training for law enforcement agencies in Texas and throughout the country and developed the first defensive tactics course for the Texas Department of Criminal Justice Parole Officers. He also developed an impact and empty hand training video for Texas Department of Criminal Justice and in 2002, was awarded a medal for being Senior Student in the Pekiti Tirsia Global Organization by Tuhon Leo T. Gaje. He has also operated several martial arts schools with a curriculum consistent with that taught at the Inosanto Martial Arts Academy and provides provides on-going military and law enforcement training.

He was employed with the Texas Department of Criminal Justice for 27 years and held positions as a field parole officer, administrator and assistant director of field operations. He has held elected positions in the National Probation and Parole Compact Administrator’s Association as: President, President Elect, Treasurer, and Executive Councilman.

Guro Parra is happily married since August of 1980 and has three children, two sons and one daughter. Both sons are college graduates and his wife holds a doctorate in Psychiatric Nursing, which I’m sure comes in handy dealing with a lifetime martial artist like Guro Parra. His other physical activities include running, walking, weight training and diet, in addition to general fitness and music.

“Train to become an instructor who never stops being a student.” “Don’t take life so seriously and enjoy the things that you like to do and find enjoyment in things you have to do.” Perhaps this is what keeps the smile on his face that is seen so often during his seminars.

Guro Parra has revitalized my interest in training in Kali, Jeet Kune Do and Silat and I look forward to many years of training and friendship with him. He is a fascinating man and I hope that all of you get a chance to work and train with him in the coming years. It will be time well spent.